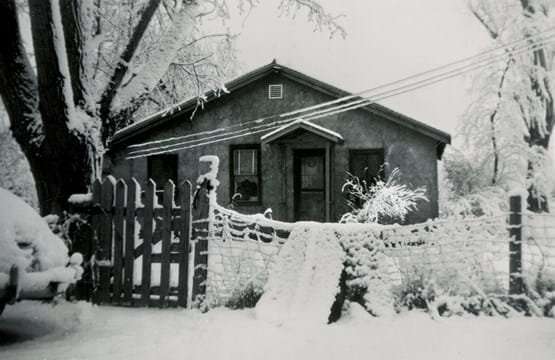 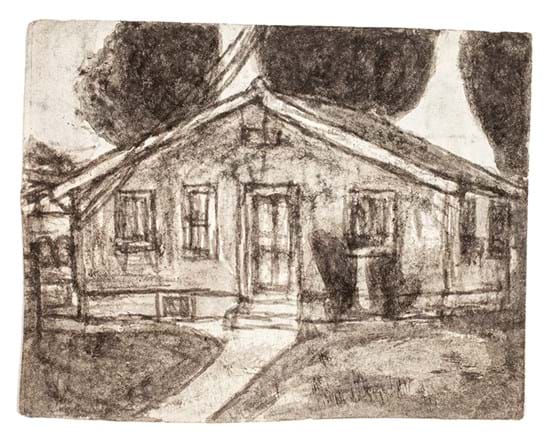 Houses take on a central role in James Castle’s art, perhaps because the three he lived in over the course of his life dominated his physical relationship to the world.

While he frequently revisited the family homes in Garden Valley and Star in his drawings, Castle lived in and around this house for more than half his life, and it remains the main stage of how we understand his experience and how he chose to represent it. This house is also the backdrop for Castle’s mature work—really the only known work to survive the family’s prior moves. It is at this house that Castle produced the art we know him by today, but also where he became a celebrated artist known across the Pacific Northwest for his unprecedented work.

When Castle’s mother, Mary, purchased this house in 1931 it looked quite different. Although the current structure is modest by today’s standards, the original house on this site was considerably smaller. We do not know precisely when the original farmhouse was built but it first appears in records in 1923. Recent research shows this house was only 12 x 26 feet, and ran lengthwise from the current front door. The remaining structure is the product of several additions completed over a span of decades. Different building practices evident in different portions of the house lend a window into vernacular building techniques across the twentieth century. While small, the Castle family home was comfortable and a worthy subject for James Castle’s art. The rooms and their contents were frequently depicted in his drawings.

Research conducted during the house’s restoration has increased our understanding of the environment Castle lived in and the materials he used to in create his work. The removal of sheetrock and other more modern materials allow us to see the surfaces Castle would have seen and to experience the spaces he liked to draw. One exciting discovery was the original rough sawn farmhouse wall covered over with newspapers from the 1930s (on view inside). While this economic means of insulation was common at the time, its presence here suggests a direct connection between the house itself and the inspiration for Castle’s art. Mass printed media like newsprint served as both the material and inspirational foundation for his work, and his most direct connection to the world beyond his immediate surroundings. An even more thrilling find occurred when project managers removed layers of a wall in what is now the house’s main gallery and found papers, objects, and fragments of drawings, clearly undisturbed since Castle hid them there decades ago. Castle was known to squirrel away his work in all manner of locations, including throughout buildings he had access to, leaving open the prospect of future discoveries in this house. What will we find next?

A Program Provided By